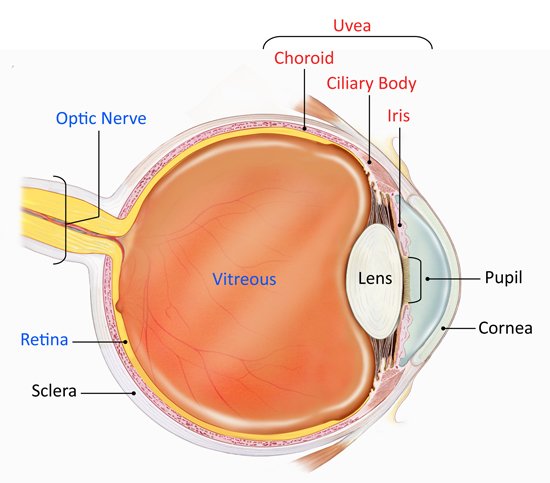 Uveitis (u-ve-I-tis) is inflammation of the uvea, the middle layer of the eye. The uvea consists of the iris, choroid and ciliary body. The choroid is sandwiched between the retina and the white of the eye (sclera), and it provides blood flow to the deep layers of the retina. The most common type of uveitis is an inflammation of the iris called iritis, anterior uveitis. Infections, injury and autoimmune disorders may be associated with the development of uveitis, though the exact cause is often unknown. It can be serious, leading to permanent vision loss. Early diagnosis and treatment are important to prevent the complications.

The signs, symptoms and characteristics of uveitis include:

In any of these conditions, the jelly-like material in the center of your eye (vitreous) can also become inflamed and infiltrated with inflammatory cells. Symptoms may occur suddenly and get worse quickly, though in some cases, symptoms develop gradually. Symptoms may be noticeable in one or both eyes.

Sometimes, the specific cause of uveitis is not clear. However, in some people, it is associated with: